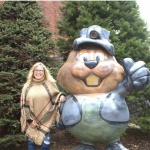 Kent and I spent a week in Pennsylvania last fall. Well lo and behold we discovered we were really close to Punxsutawney.  I figured we needed to take a quick side trip. Visit Phil from Punxsutawney and discover another cool place to visit. Do you remember Ground Hog Day?  The movie that immortalized the town and the furry guy we call Phil. Well it is a cute little town and guess what there are Phil’s all over the place. 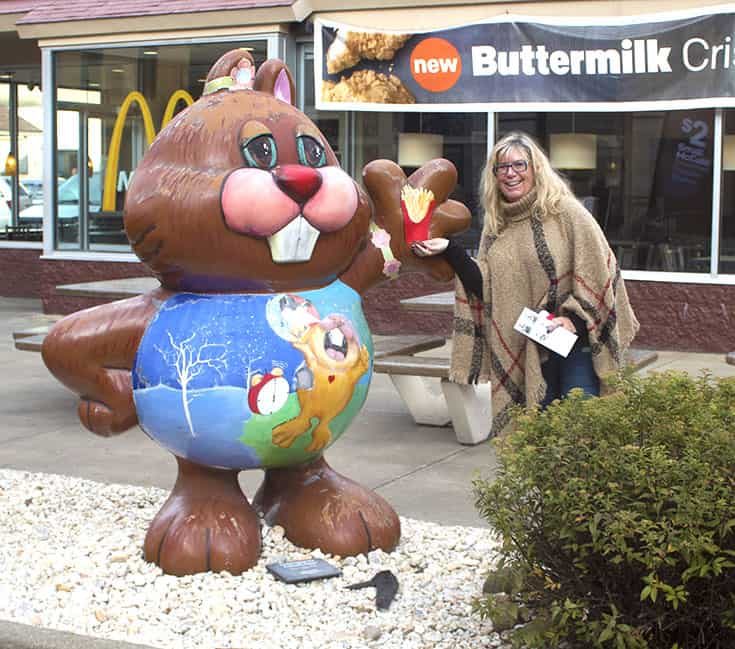 Ground Hog Day is a popular tradition celebrated in the United States and Canada on February 2.  A tradition apparently derived from the Pennsylvania Dutch superstition that if a groundhog emerging from its burrow on this day sees a shadow due to clear weather, it will retreat to its den and winter will persist for six more weeks. But if he does not, due to cloudiness, spring season will arrive early.  Phil and all his buddies are a signal of HOPE, Hope that winter will soon end. Consequently he may become a frenemy to me depending on his actions today.

Punxsutawney’s  Groundhog Day ceremony has become the most popular celebration that I know of. Although other cities in the United States and Canada have also adopted the event none come close to this little town.  Punxsutawney ceremony is said to draw crowds as large as 40,000 gather each year .

Punxsutawney’s most famous resident is Punxsutawney Phil, a groundhog said to predict the weather annually on Groundhog Day. Which coincidentally is today, woohoo. Phil and the town were the basis for the 1993 film Groundhog Day .  Fun Fact:  nearly all of the film was  actually shot in Woodstock, Illinois. Ironically the film actually made the name “Punxsutawney Phil” a national cultural reference in the US. Filmed elsewhere but still the impetus behind the fame.

but back to Phil cuz I got to meet him. 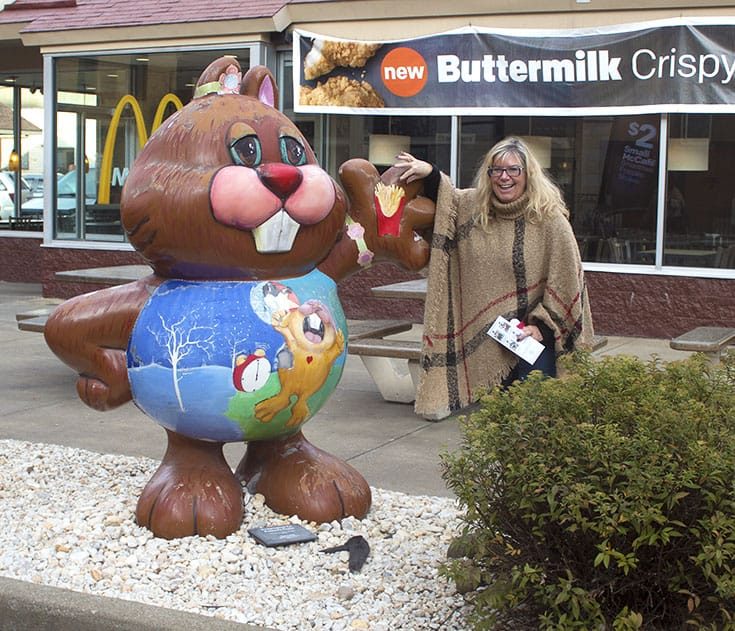 There is even a little shop dedicated 100% to this furry little guy. Did I say shop?  Yes I never let an opportunity for browsing pass me by. Tons of Ground Hog merchandise, a few furry friends and enough kozzy’s, magnets and other knick knacks to satisfy all of us. 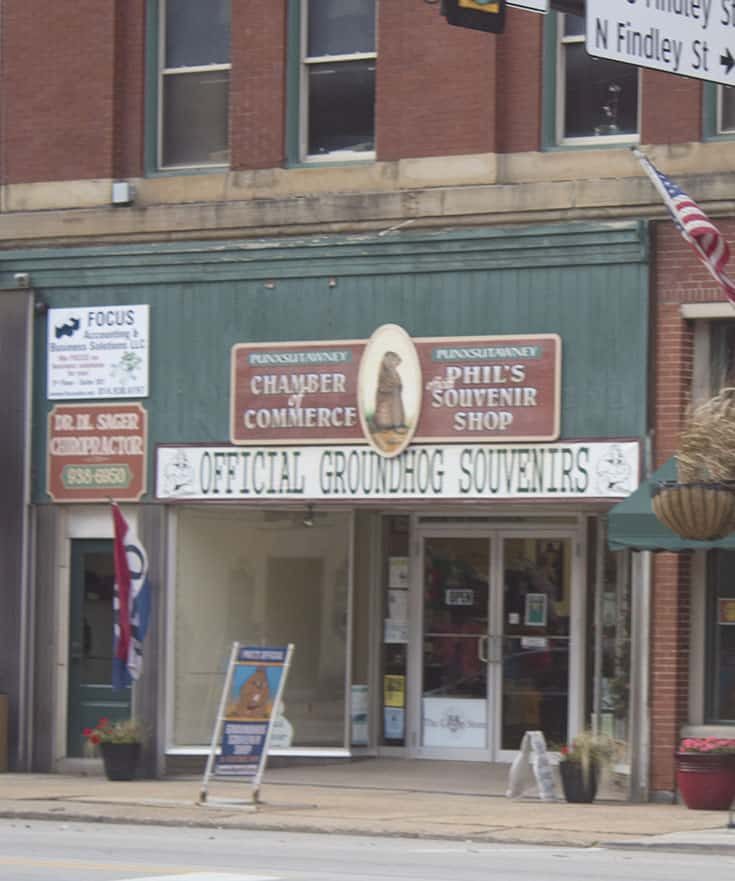 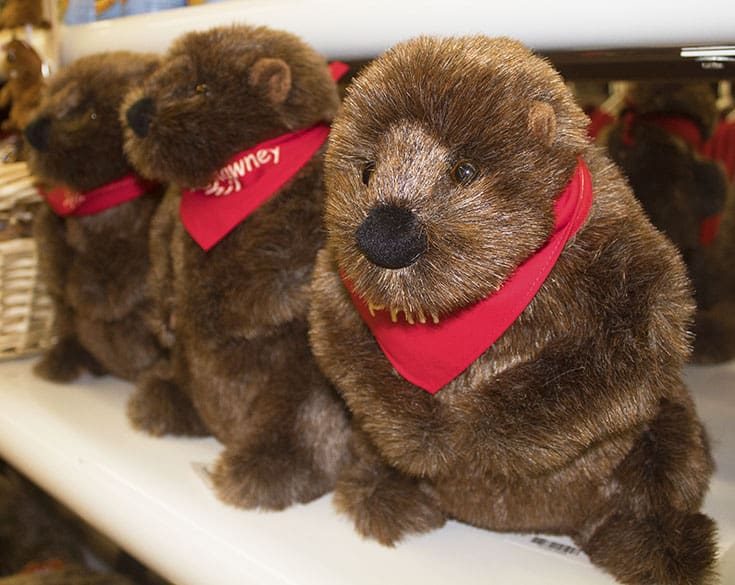 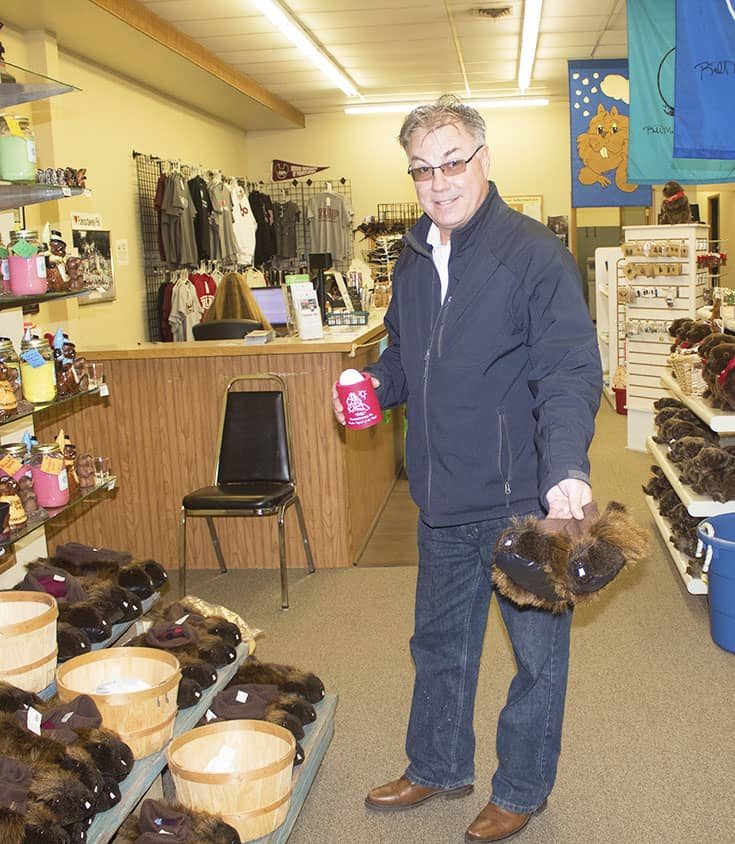 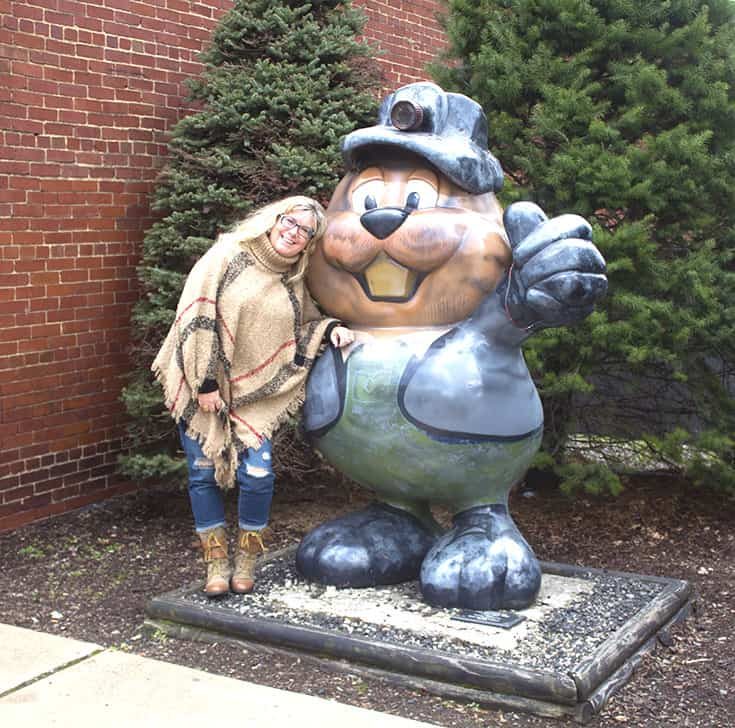 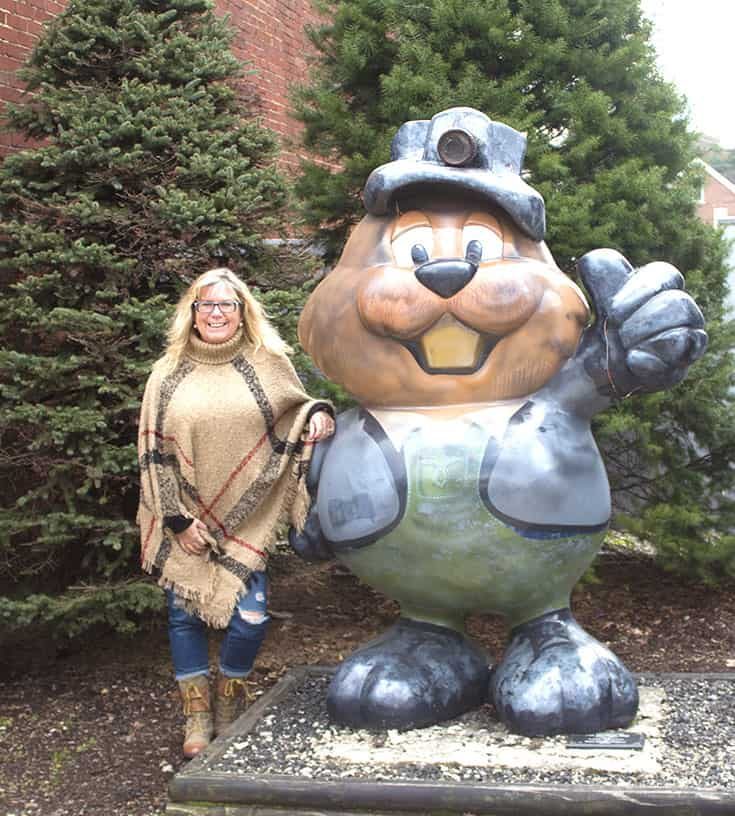 Phil is quite the celebrity in this little town in Pennsylvania.  Honestly everywhere I went there he was.  The “Phantastic Phils” of Punxsutawney are a series of 32 plump, six-foot-tall, larger-than-life, friendly, colorful, creative, whimsical, artistic statues of the groundhog, Punxsutawney Phil, the World’s Most Famous Weatherman.

An outdoor public art project of the Punxsutawney Area Chamber of Commerce, the statues decorate the streets and landscapes of Punxsutawney and apparently took two and a half years to complete. As a result, the “Phantastic Phils” are only considered “members” of the community, but they are “scattered around the community greeting residents on a daily basis. A constant delight for visitors who eagerly search them out.”

Phyllis waves to her visitors right outside McDonalds. Located on West Mahoning Street just footsteps past the Chamber of Commerce. And yes she offers visitors a taste of her fries. 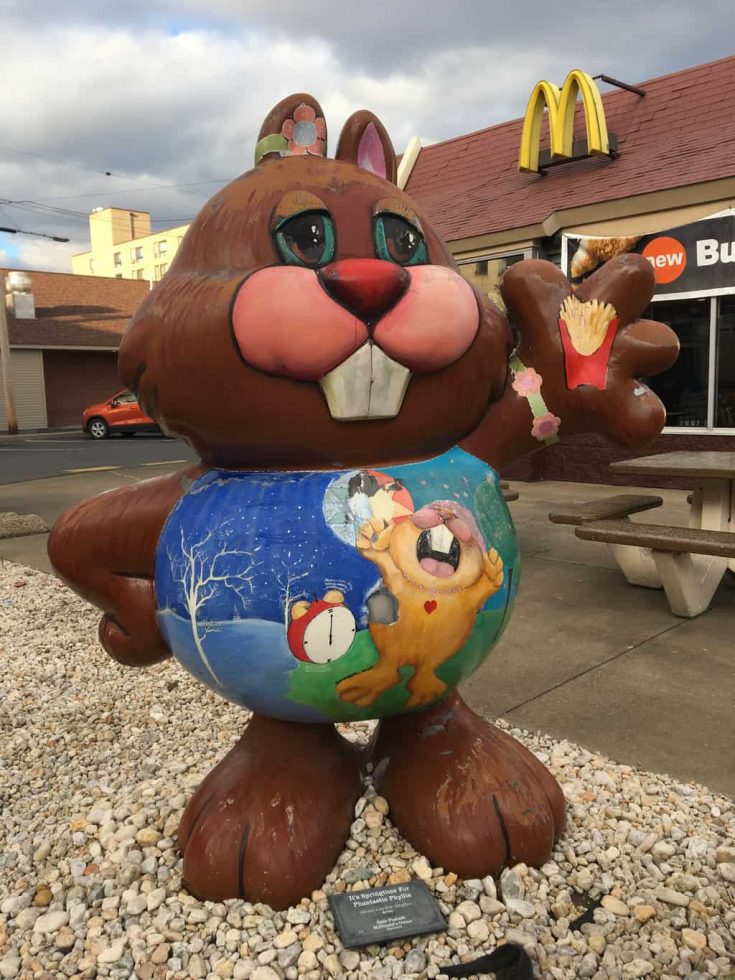 Phillage, Punxsutawney Phil himself, the first statue created, made its debut on Groundhog’s Day 2004, sponsored by the Punxsutawney Groundhog Club. It shows Phil dressed in the traditional tuxedo and top hat, making this sculpture actually seven feet tall. Unfortunately, we were driving by before I spotted Phil so sadly I did not get a great picture. 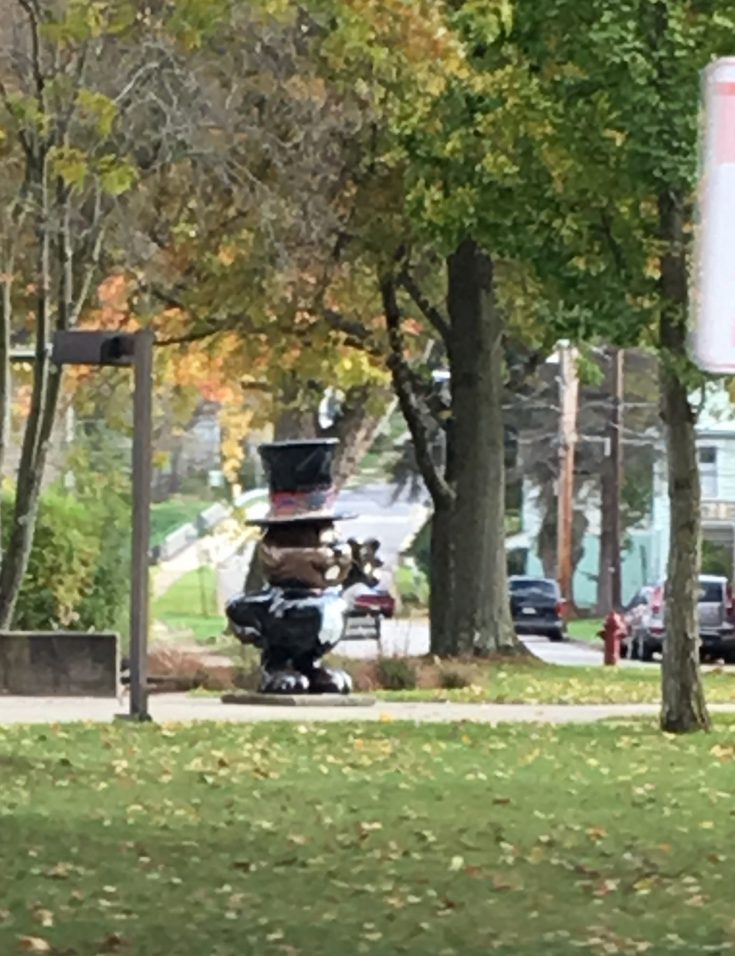 Modeled after the Statue of Liberty, “Freedom Phil” was sponsored by the committee that hosts Punxsutawney’s annual Groundhog Festival during the week of the Fourth of July. Interestingly, the copper paint used on this sculpture will age to give it the look of “verdigris,” the green pigment that is similar to that used on the real Statue of Liberty. 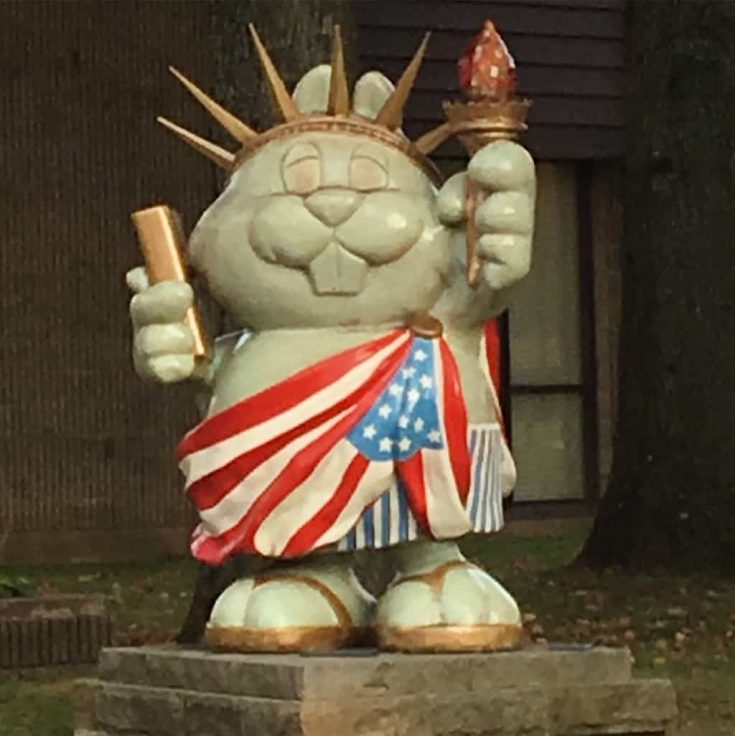 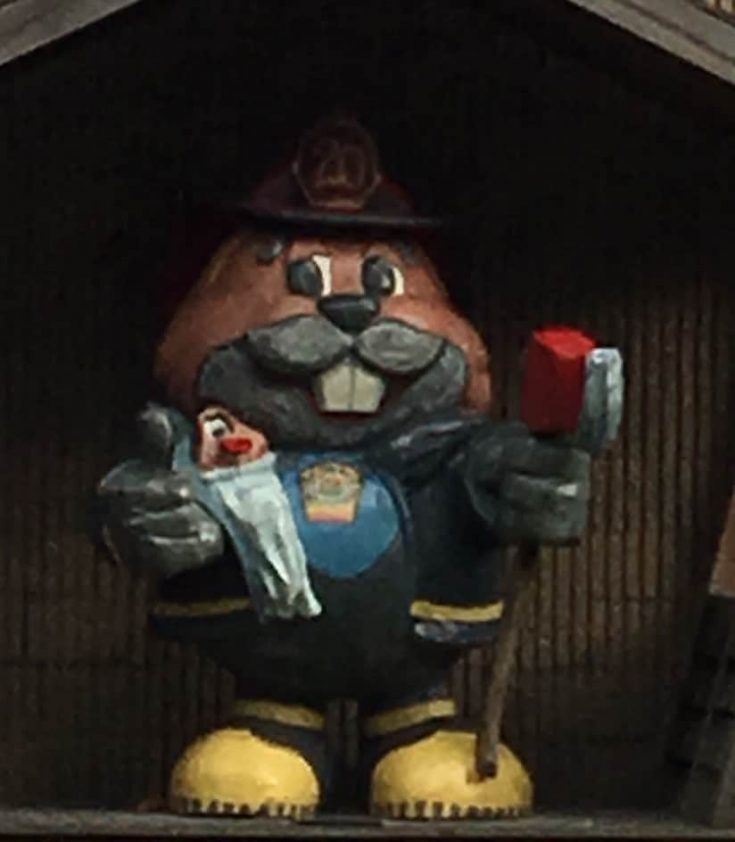 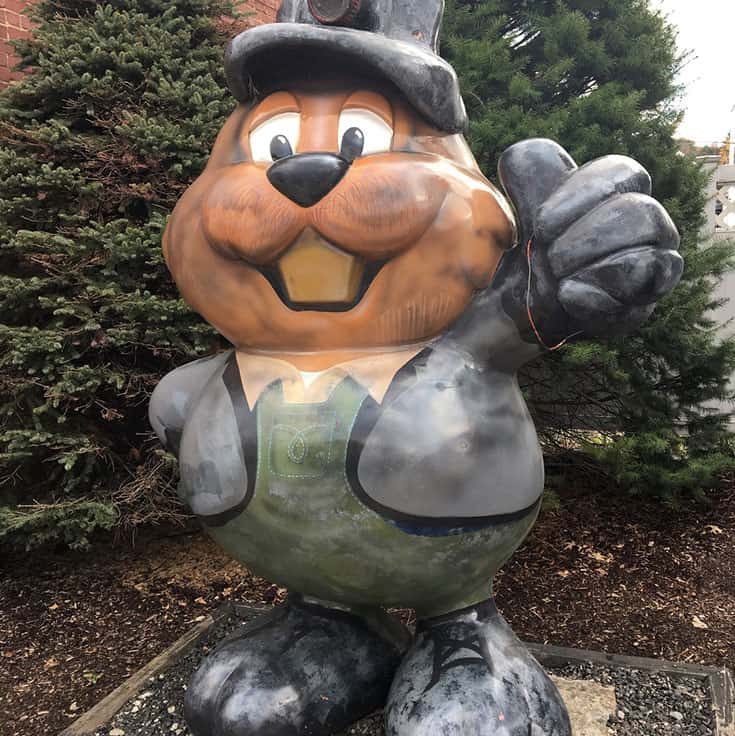 On a really sad note: I did see Presby McPhil but I never got a picture. Guess that means a return visit. Presby is located at the Presbyterian Church representing its Scottish heritage. You can check out all the Phils for yourself and discover 32 more reasons to head to Punxsutawney.

Food Advertisements by
Please note that some of this site’s links are affiliate links, and alabouroflife.com is a participant in the Amazon Services LLC Associates Program, an affiliate advertising program designed to provide a means for us to earn fees by linking to Amazon.com and affiliated sites. At NO ADDITIONAL COST TO YOU, I will earn a small commission, if you purchase them. Please note that these are products I know/use and recommend to my customers. I recommend them as they are good products.
27 shares