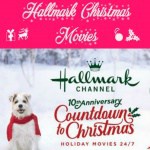 Kent came home from work today ( Wednesday)  and actually stated “You watched A Christmas Movie today?” Yep tis true, I pvr’ed all the Christmas in July Hallmark movies.  It’s never to early for a Hallmark Christmas Movie is it?  Well except when a Fall Harvest original is on.

So grab your favorite mug and cozy Christmas sweater  and get ready to mark up your calendar. Your PVR is about to start working overtime. The Hallmark Channel has released the entire schedule for Countdown to Christmas 2019.

And this gal has got you covered, I just may have done some internet surfing while home sick. This year marks the 10th anniversary of the network’s special holiday movie bonanza and they did not disappoint.

A whopping 40 new original movies will air across both Hallmark networks. The holiday-themed fun begins soon—October 25th to be exact! No shame in getting into the spirit early. Heck, some say it’s good for you! 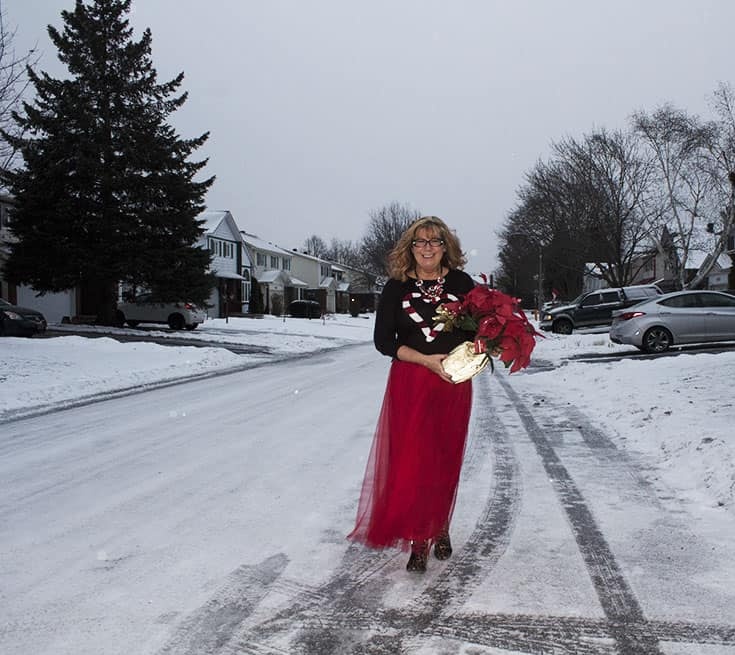 This is a compilation of all the sites listing the Hallmark Movies.  I have included the summary when available and will continue to update as new information becomes available.  In the meantime sit back and relax and get ready for the holidays.  Hallmarks Countdown to Christmas starts October 25th and includes 24 new premiers

Even in the cheery world of Hallmark, the holidays are insanely stressful. For Abbey (played by Jill Wagner), December brings a new job as an interior designer and a potential love interest who just so happens to be her brand new boss. Things get complicated, to say the least.

Enter this season’s candy cane drama. Fuller House‘s Jodie Sweetin joins Hallmark regular Andrew Walker in her third holiday movie. She plays Cate, the CEO of the Merry & Bright Candy Cane Company, who thinks she’s being set up with Gabe (played by Walker), but instead he’s really trying to find ways to optimize — or even, take over — her business.

No Mountie here: When Calls the Heart star Kevin McGarry brings the drama in his first-ever Hallmark movie, Christmas Scavenger Hunt. The movie — you guessed it — is about a town’s annual scavenger hunt. The catch? Two exes (played by McGarry and Kim Shaw) are forced to team up and keep the Christmas spirit alive.

The best things in life can be unexpected, which is true for this young sports photographer (played by Merritt Patterson) who moves back home to care for her grandmother. While there, she meets a man (played by Jon Cor) who needs someone to care for his nephew — and you guessed it, she’s happy to lend a helping hand.

Kellie Pickler is back under the mistletoe: She’s teaming up with Tyler Hynes and Patrick Duffy in The Mistletoe Secret.

Saturday, November 16: Christmas Under the Stars

In some cases, the magic of Christmas can solve even the toughest problems. In Nick’s case (played by Jesse Metcalfe), he meets Julie (played by Autumn Reeser) who helps him overcome his recent layoff and get in the Christmas spirit. As luck would have it, she’ll need a holiday boost, too.

Chad Michael Murray joins Hallmark regulars Torrey DeVitto and Drew Seeley in this fun movie, which tells the story of Jessica (played by DeVitto) who sends Christmas cards to five important people in her life. But it’s their reaction — or lack thereof — that really makes things interesting.

We’ll get double the dose of Erin Krakow this holiday season in Sense, Sensibility & Snowmen. Loosely based on the Jane Austen classic, the movie follows a party planner named Ella (played by Krakow) who clashes with “a not-so-jolly toy company CEO” (played by Luke Macfarlane from Brothers & Sisters).

Saturday, November 23: Christmas at Graceland: Home for the Holidays

We’re heading back to Graceland this year! One minor detail: Kellie Pickler and Wes Brown won’t be along for the ride since this movie is totally unrelated to Wedding at Graceland. It’s just as magical, though: While filling in as a Graceland tour guide, Kaitlin Doubleday‘s character is offered to nanny the three children of Adrien Grenier‘s character.

Sunday, November 24: A Gift to Remember 2

Because Darcy and Aidan’s love story is far from over. Ali Liebert and Peter Porte return to continue what they started or, potentially, put the brakes on their complicated romance.

A Christmas Duet, which stars Teryl Rothery, Chaley Rose, and Rome Flynn, promises to bring good tidings and joy in the form of music. Averie and Jesse (played by Rose and Flynn) are a former music duo who went their separate ways — until this year. Just in time for the annual Yuletide Festival, the two get brought back together and are forced to decide whether or not they’ll ignite an old flame.

Just when they thought they were too busy to find love, Olivia Bennett (played by Elizabeth Mitchell) and Edward Taylor (played by Cameron Mathison) meet while helping an elderly woman track down her lost savings. Along the way, they figure out what they’re really missing: each other.

Double the Christmas, double the fun: Stars Kristoffer Polaha and Carly Pope find out if that’s true in this brand-new movie.

No plot details yet, but we’re guessing that the movie, which stars Rachel Boston and Wes Brown, takes place at an inn during Christmas. Just a thought.

Friday, November 29: Christmas at the Plaza

Ryan Paevey and Elizabeth Henstridge partner up in this Christmas love story.

After the success of Pride, Prejudice, and Mistletoe, Lacey Chabert is working with Sam Page in her eighth Hallmark Christmas movie. Set and shot in Rome, Chabert plays an American tour guide named Angela, who is fired from her job just in time for Christmas. Soon after, she meets Oliver, a fellow tourist, who hires her to be his personal tour guide — and well, you can guess what happens next.

Just like Chabert, Candace Cameron Bure is headlining her eighth Hallmark Christmas movie, Christmas Town. The movie tells the story of Lauren Gabriel who leaves the big city for the small town of Grandon Falls. Along the way, she meets a few key townspeople, played by Wynonna Earp‘s Tim Rozen and Sabrina, the Teenage Witch‘s Beth Broderick, who remind her the real reason for the season.

In her Hallmark debut, Tony Award winner Kristin Chenoweth plays a youth choir director who discovers the vocal talent of one of her students. The catch? The young boy’s dad, played by Party of Five’s Scott Wolf, has no idea that his son has a golden voice.

Last year introduced Hallmark fans to Graceland. This year is the year of Dollywood. Danica McKellar plays Rachel Lewis, a single mom who ditches New York City to return to her roots in Tennessee. While there, she’s offered an opportunity to produce a show for the 20th anniversary of the Smoky Mountain Christmas Festival at Dollywood. The only problem? The park’s (very single) entertainment director. Luckily, Dolly Parton — yes, the country superstar — saves the day.

Saturday, December 21: It’s Beginning to Look a Lot Like Christmas

On the schedule but a bit of a mystery

The storyline may still be up in the air, but it’s confirmed that the whole WCTH cast is returning for another holiday season in Hope Valley.

The days of holly and mistletoe are over (for now): Aimee Teegarden focuses on new beginnings and midnight kisses in this New Years-themed movie.

Holy hannah Hallmark even created a fun printable. Head over for your own personal copy. 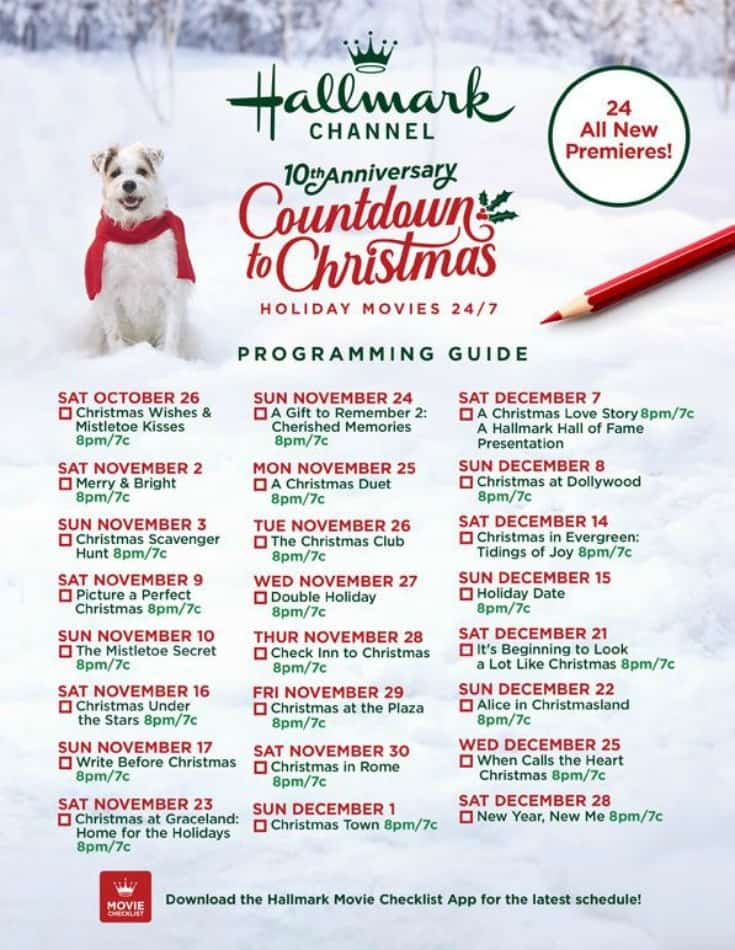 For Corey (played by Ashley Newbrough), everything’s fine and well until a visitor (played by Kyle Dean Massey) shows up at her mom’s antique shop. Their interaction causes Corey to ask one major question: Why didn’t she follow her dream of becoming a theater director and more importantly, is it too late?

Chad Connell and Erica Deutschman partner up in this cheery Christmas film. While the plot hasn’t been released, one thing’s for sure: It’ll be full of Christmas cheer and Hallmark-worthy romance.

Brooke D’Orsay and Trevor Donovan bring together two of our favorites — Christmas and the feeling of nostalgia — in this seasonal movie.

This movie starring Nikki DeLoach and Michael Rady is proof that Christmas miracles really do exist. When Dr. Sharon Hayes (played by DeLoach) visits her hometown and meets a little girl and her disheartened dad (played by Rady), she rediscovers what the holiday is truly about: love.

Audrey (played by Melissa Claire Egan) writes a year’s worth of letters to Matt (played by Marc Blucas), a soldier in her brother’s company oversees. As the holidays get closer, their relationship intensifies when Matt makes a surprise visit to her hometown.

Based on the God Winks book series, Kathie Lee Gifford joins a new cast — Cindy Busby and Ben Hollingsworth — in the sequel to last year’s A God Wink Christmas. While the storyline is still up in the air, our guess is that Aunt Jane (played by Gifford) will offer more wisdom to the young lovers.

Ashley Williams and Paul Campbell team up in this Christmas classic.

Thursday, December 5 at 9 p.m.A Homecoming for the Holidays

Friday, December 6: Time for You to Come Home for Christmas

Blake Shelton is producing another Hallmark Christmas classic.  The movie is based on the 2012 song he wrote and recorded with his mother, Dorothy Shackleford, called “Time for Me to Come Home,” as well as her book by the same name. That means it’s safe to assume that his new movie will also have family and musical ties.

Hallmark favorites Jen Lilley and Carlo Marks head to Angel Falls in this holiday sequel, which loosely follows the events from 2017’s Christmas in Angel Falls.

While the storyline is still unknown, the finale of “Miracles of Christmas” stars Holly Robinson Peete, Patti Labelle, and Dion Johnstone.