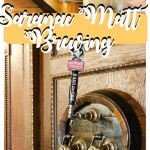 If you are not new around these parts then you know I took a quick trip to Utica last weekend. Yes quick trip because it was an overnight stay to see a concert. The Glorious Sons and The Struts were playing at Saranac Matt Brewery Company and we decided to go.  I mean honestly, beer, music and well a new town to explore. 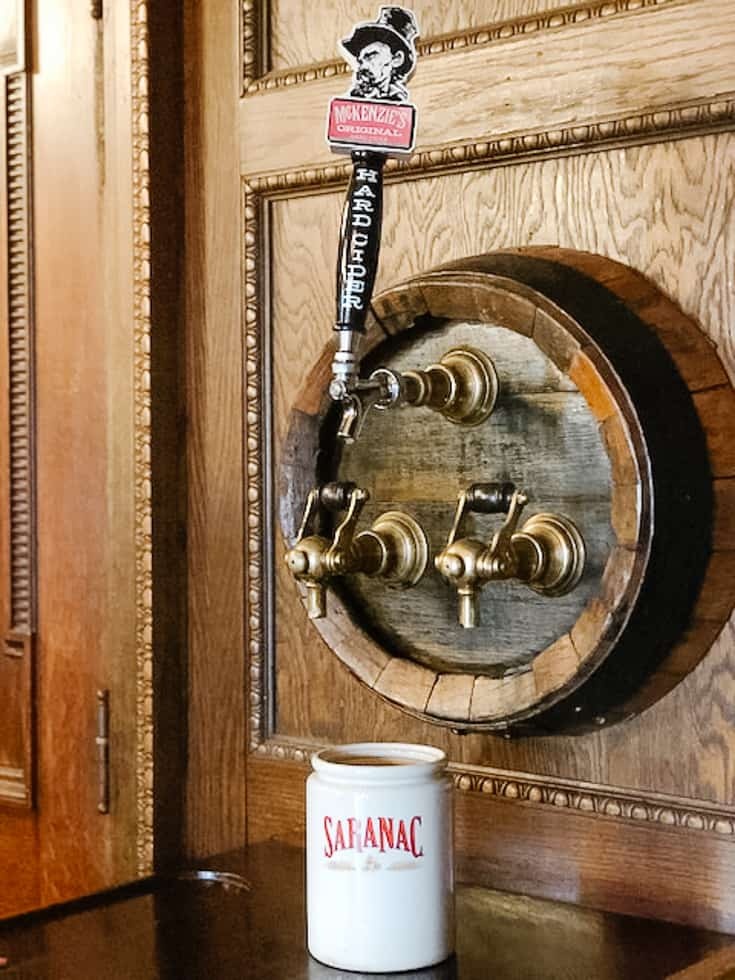 Warning Photo heavy because well why not.

Depending on where you look you might know this as Matt Brewery or Saranac Matt Brewery.  So lets have a little history lesson because well I adore history as much as I adore beer.

Francis Xavier Matt, immigrated to Canada in 1878 and went to work for Carl Bierbauers Columbia Brewery.  Ten years later he would find himself reorganizing the brewery into the Westend Brewery. It was the smallest of Utica’s 12 breweries.

The smallest but the mightiest I would say.  With an ability to adapt and grow Prohibition would see the close of all the other breweries but not this one. Adapting and changing they became a manufacturer of soft drinks and other non-alcoholic drinks.

Once Prohibition ended and the Westend Brewery is the first in America to apply for a license to get back to its roots.

The Matt Family of Matt Brewing

1951 so the end of one era and the beginning of the next.  Francis Xavier passes the reins to his son Walter who is then joined by his son FX II.  Fast forward to 1989 and Nick and Fred join the ranks making it a third generation brewery. 2013 sees the next generation stepping up.  How amazing that a brewery started in 1888 remains today still run by the family.

Kent and I had the absolute pleasure of meeting one of the owners and enjoying a beverage together.  He also informed us that many other family members still work today in various areas. ( Turns out our Bartender was a cousin) 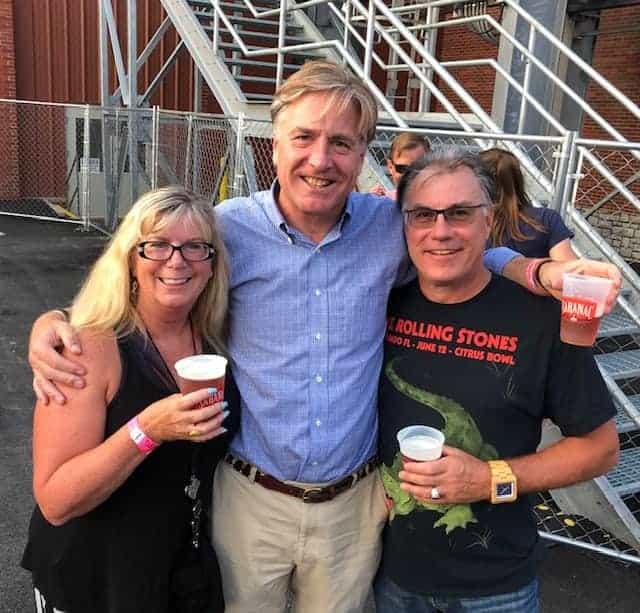 The Brewery of Saranac

The brewery is still in the same location and what an amazing space.  The welcoming front store displays not just the beer but and array of novelty ideas.  Plus lets talk turkey about the massive line of Beer Steins. 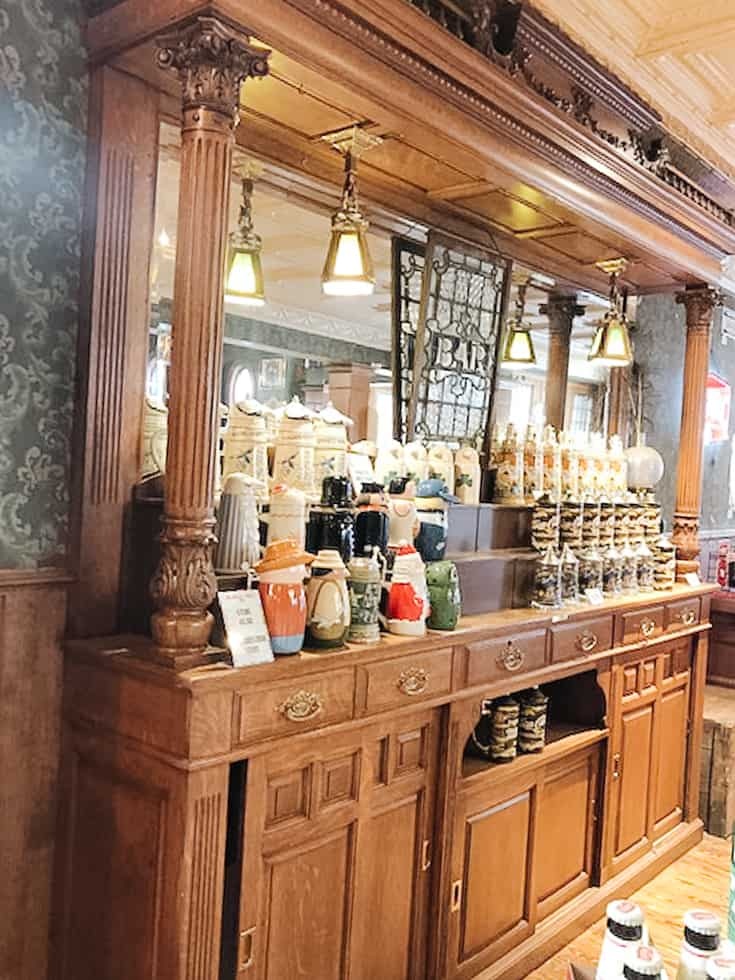 Bathed in soft light the wood floors gleam. Several display areas showcasing the steins as well as ample stock ready to go home with you.  Off the store yo will find a staircase leading you to a multi level Taproom. The historic 1888 Tavern has 13 different draft lines of their award winning beers, including unreleased Pilot beers that you won’t find anywhere else.

As for the Taproom itself.each level is stunning in its own right.  Cozy areas scattered around provide welcome conversation areas. 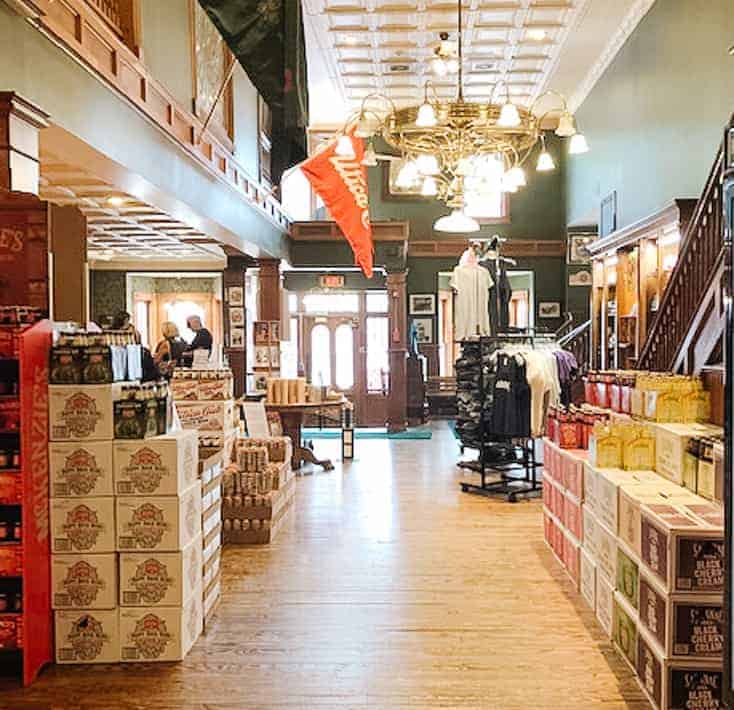 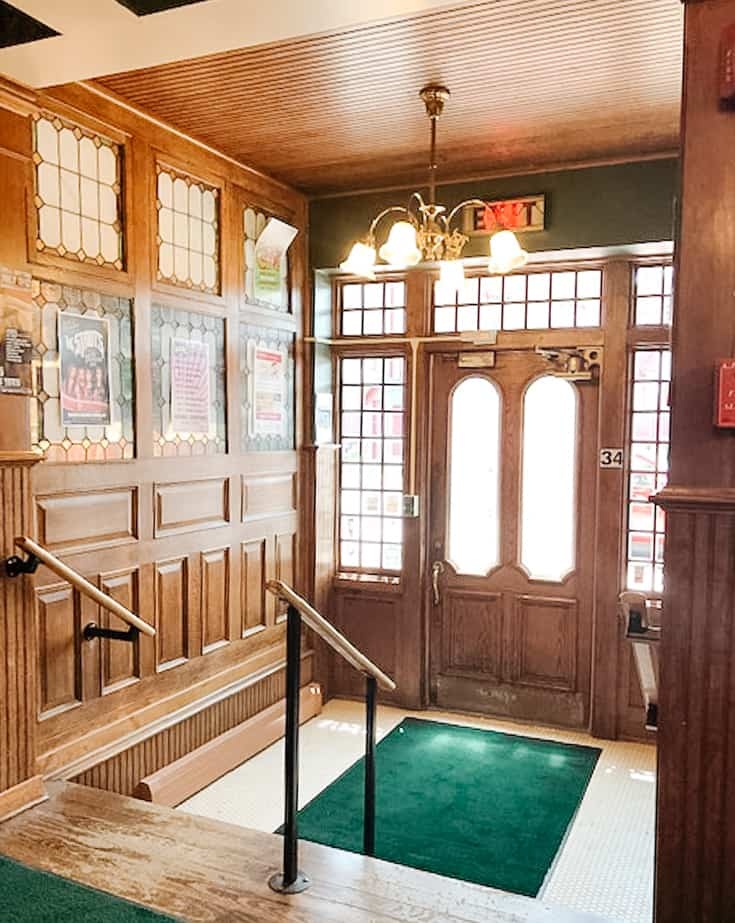 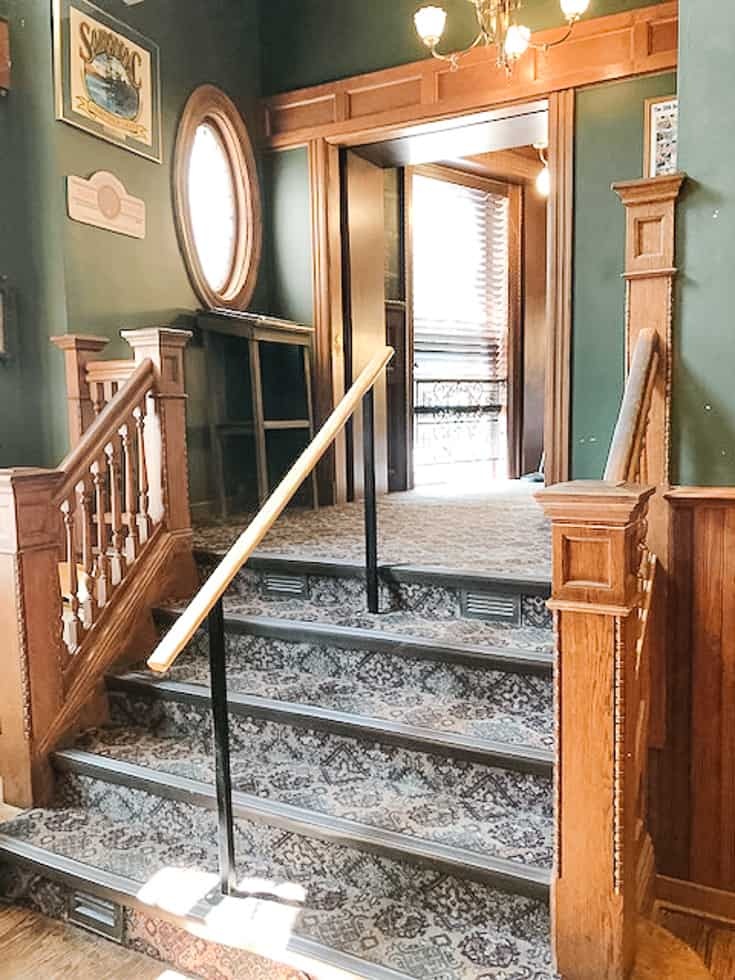 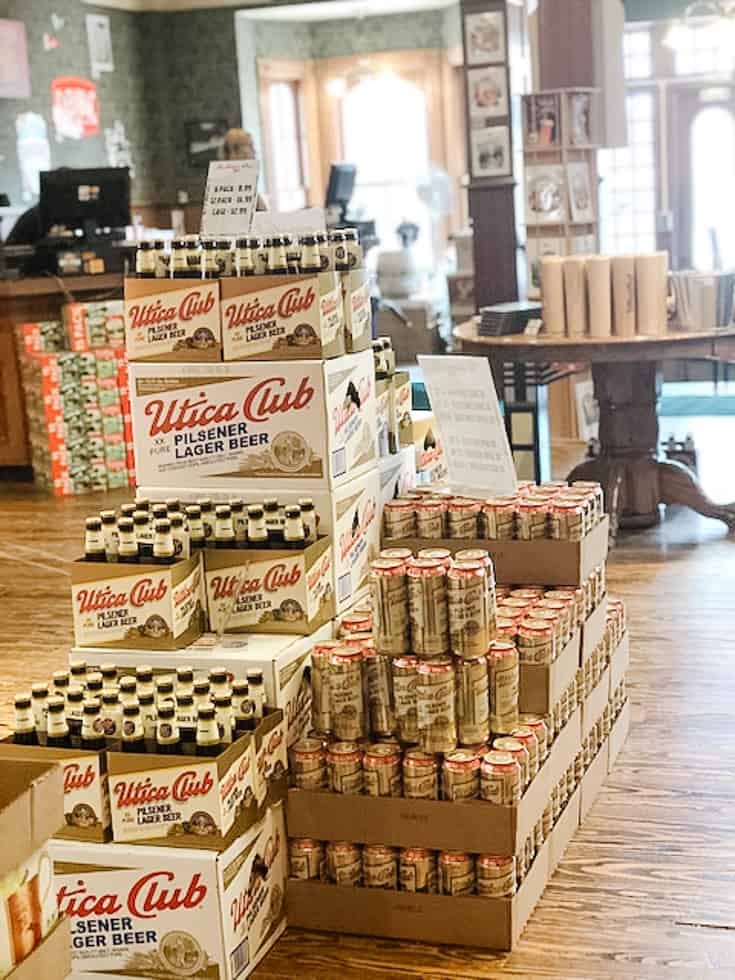 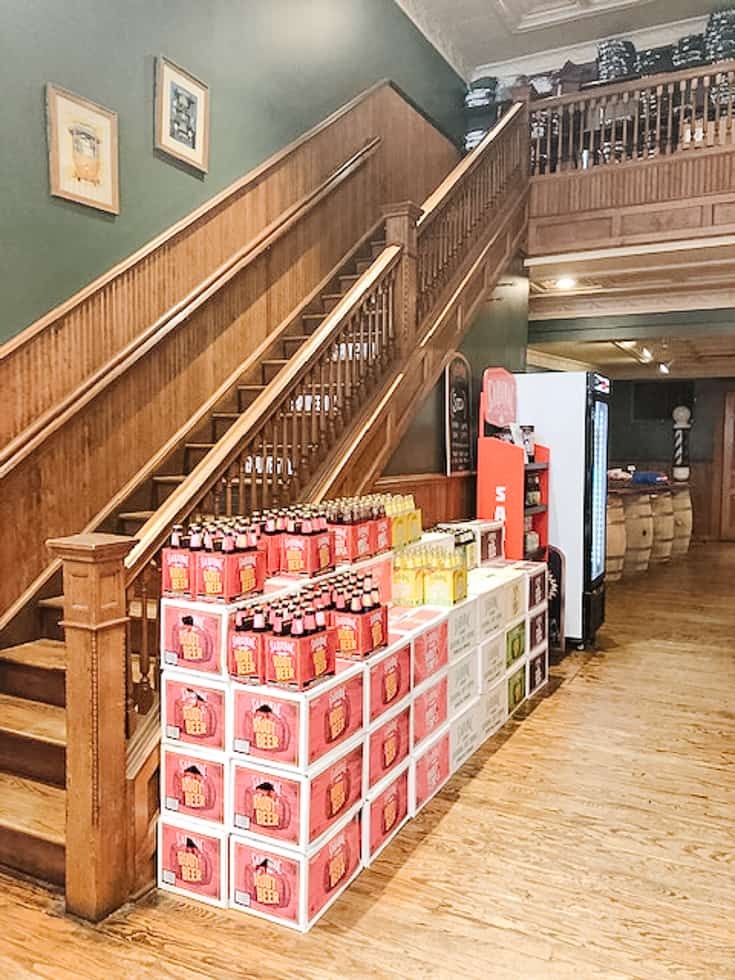 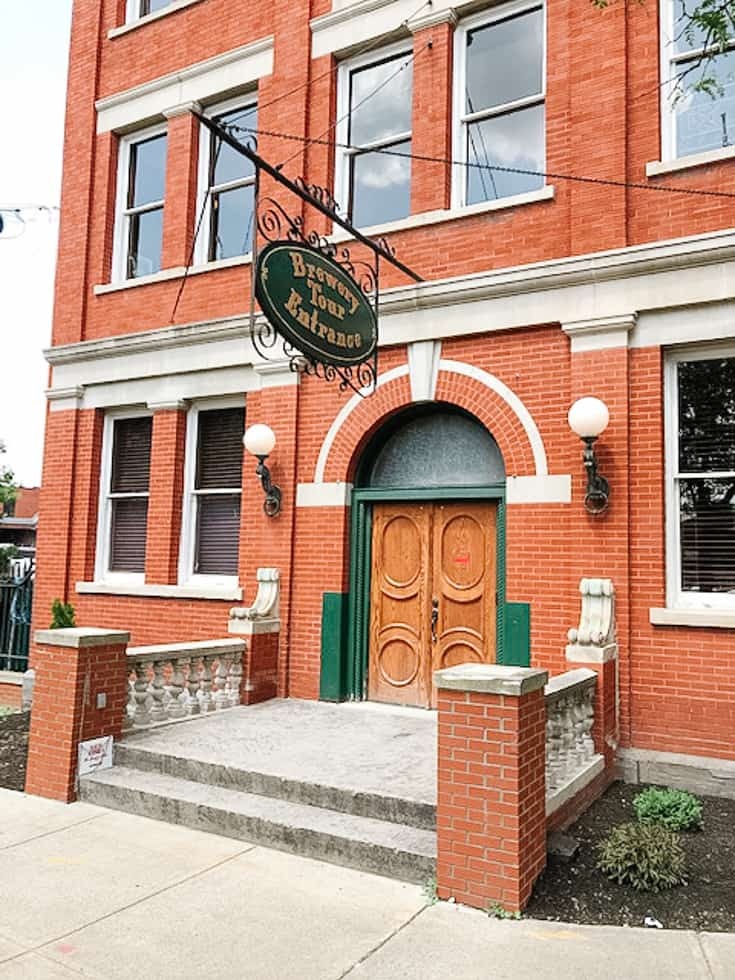 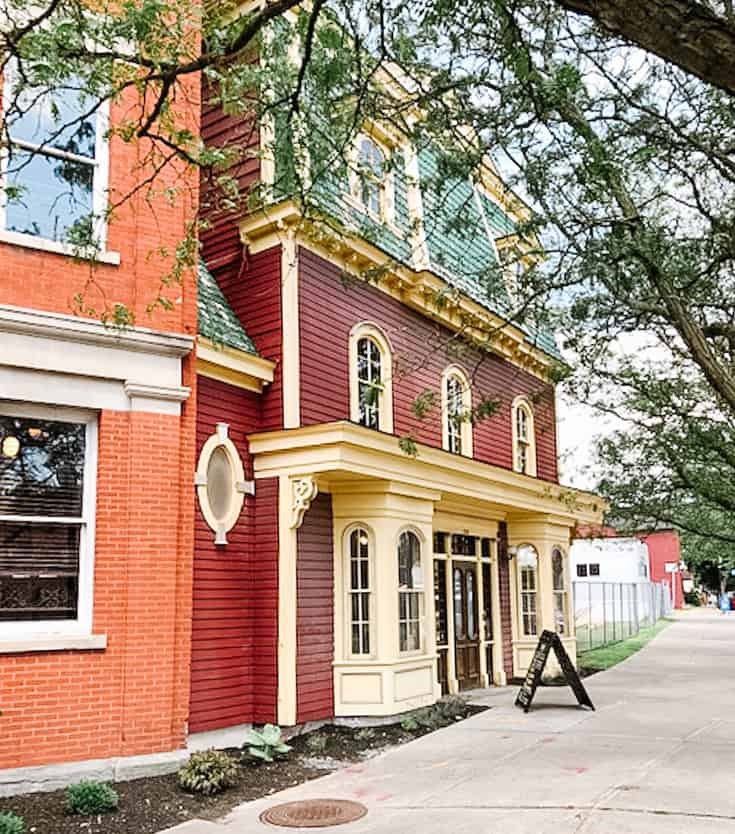 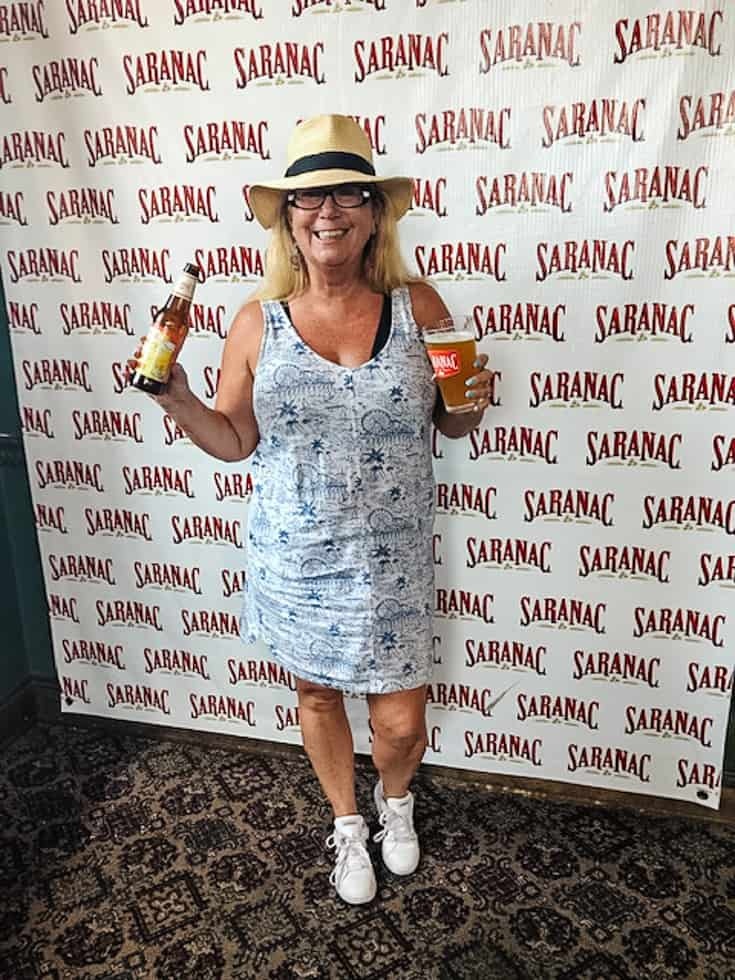 True confession and a bit of a shocker. I went to the brewery and only sampled the Citrus Squeeze. Well at least during the brewery visit.  Kent had a flight but  I just sampled and then sipped on my “Squeeze”. Ironically this beer was not advertised on the website, I saw a picture on their facebook page.  Never let it be said that Facebook does not have influence over us. 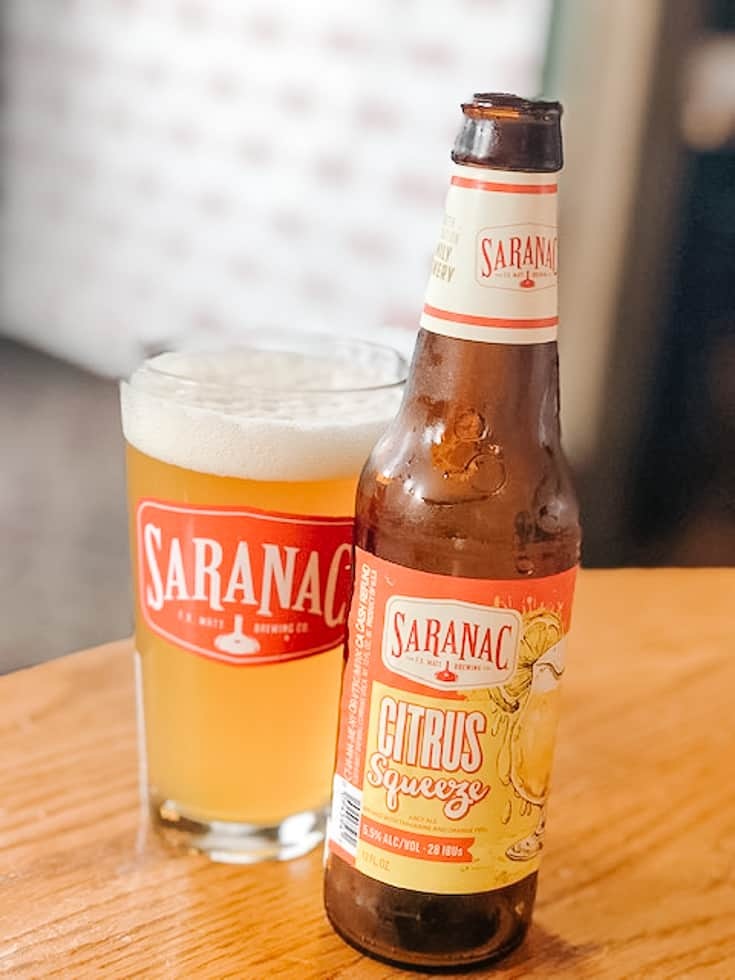 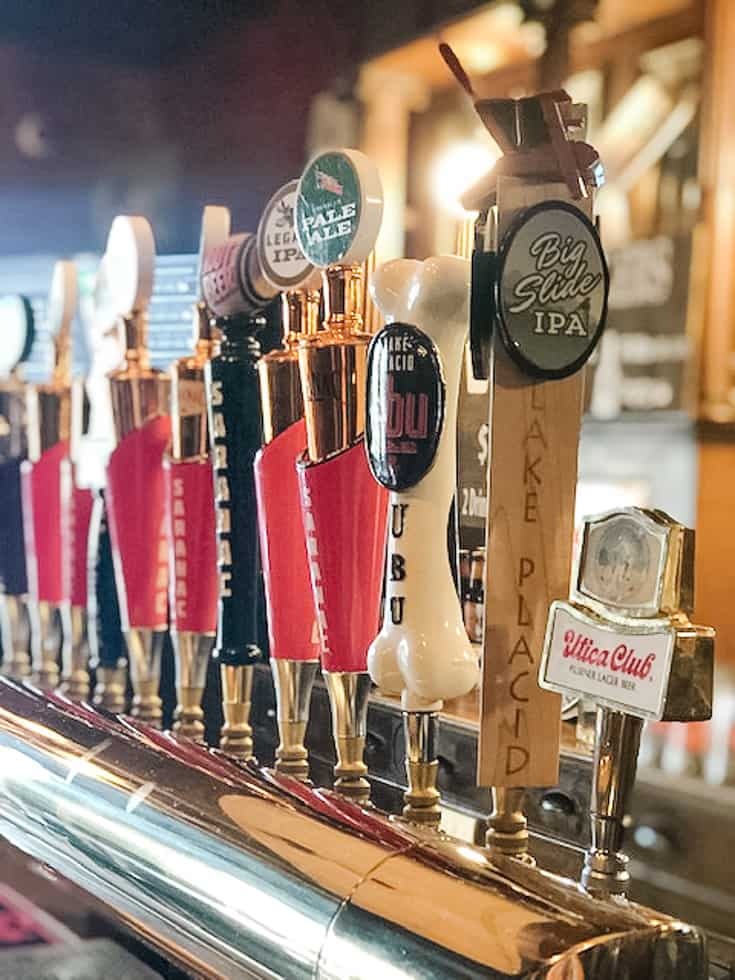 A Flight of Beer

Saranac Pale Ale– One of the original beers of the Saranac line, and was once considered our flagship, Saranac Pale Ale is definitely an O.G. in the craft category.

Saranac Blueberry Blond Ale– Saranac Blueberry Blonde Ale is a traditional blonde ale with a kick of juicy blueberry. You’ll notice a light golden haze from wheat malt and oats and a low hop bitterness, which really shows off the fruit. With a medium-light body and fresh blueberry flavor, we’re sure we’ve captured refreshment in a bottle!

Utica Club – First beer served in the US after Prohibition ended. 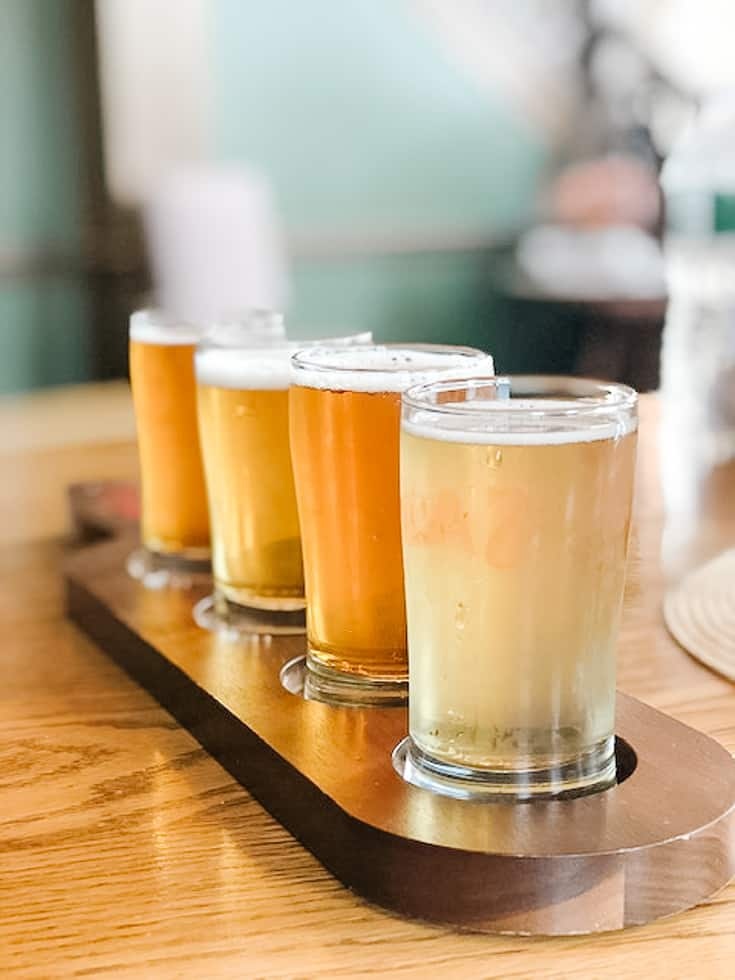 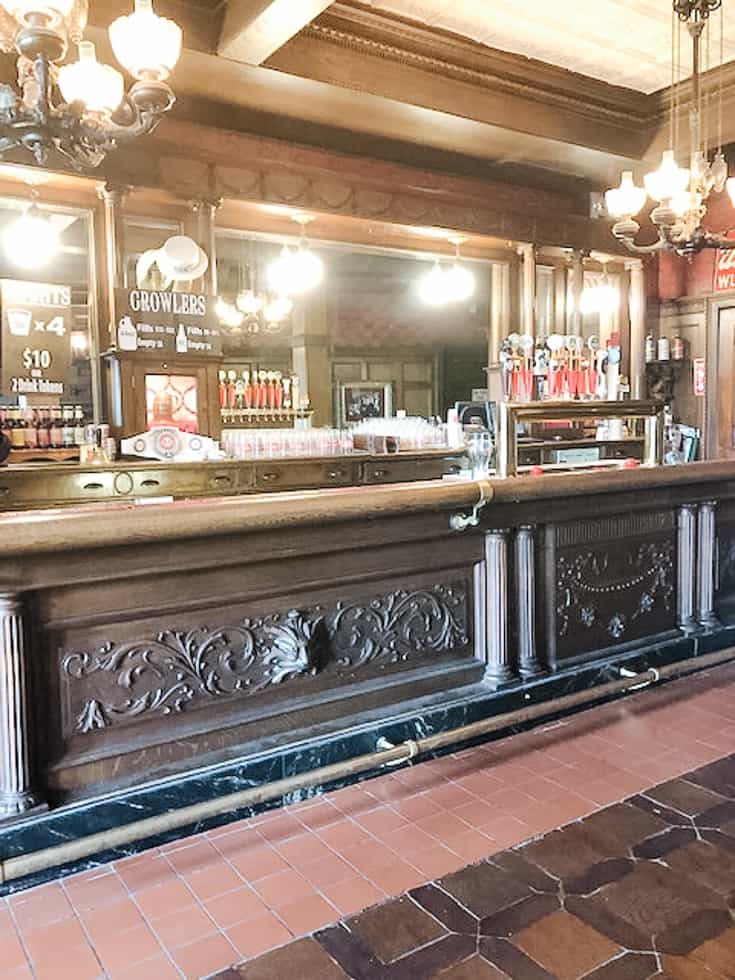 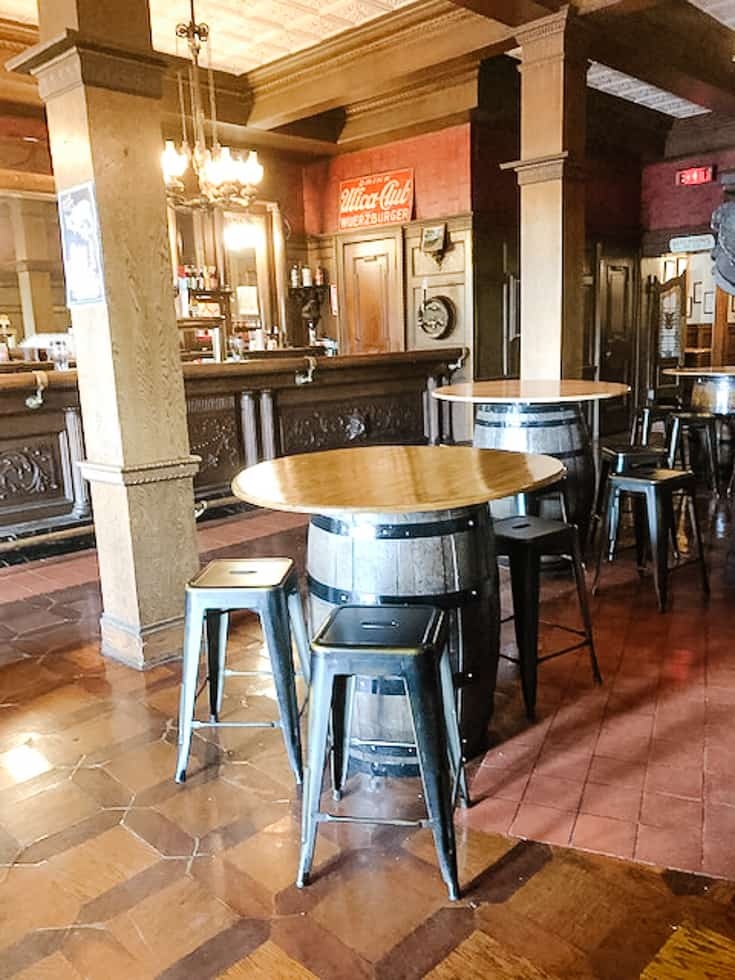 Enjoy a tour through their historic brewery & a beverage on the house in The 1888 Tavern! We didn’t have time but that’s just an excuse to head back for a visit.

The Shows at Saranac 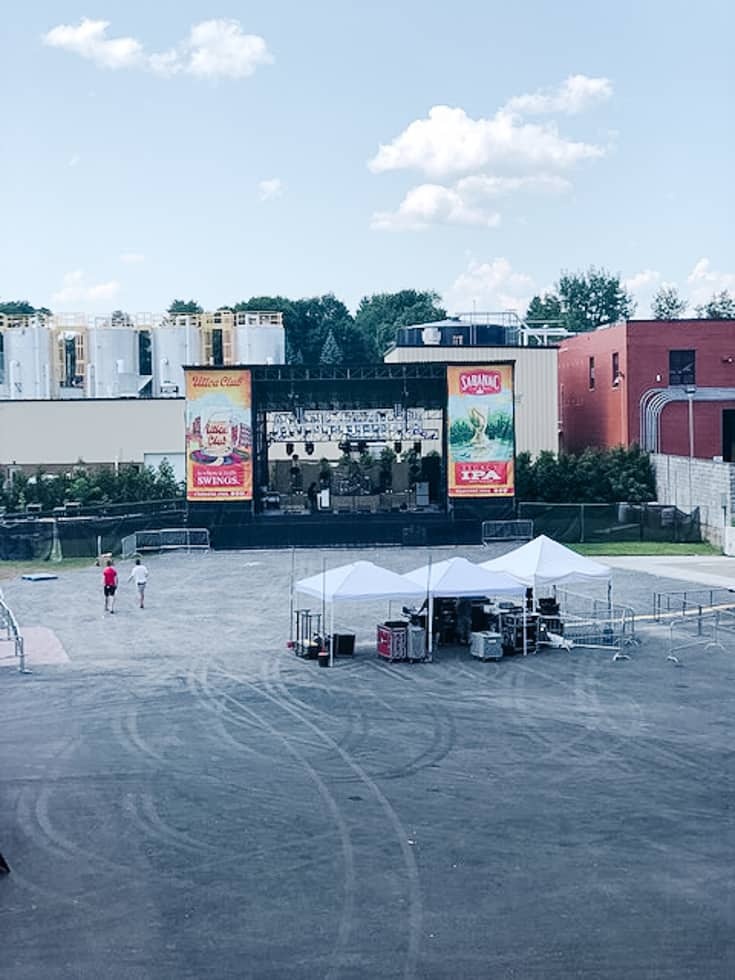 Just an FYI, there is a large stage set up for the summer.  Thursday Night summer series where you can catch some great acts and sample even greater beer.  Now we went on a Friday for a special show but still an amazing time.

Set up like a large outdoor beer garden.  The brews are flowing the stars are shining and of course the music is all around

Rumour has it The Flaming Lips are coming soon.  Trust me if you are in the neighborhood drop in.  Plus if you aren’t in the area well why not take a trip.

We coincidentally bumped into some Glorious Sons fans who were wearing The Honest Heart Collective Tees.  Yep our boys were there also in spirit. 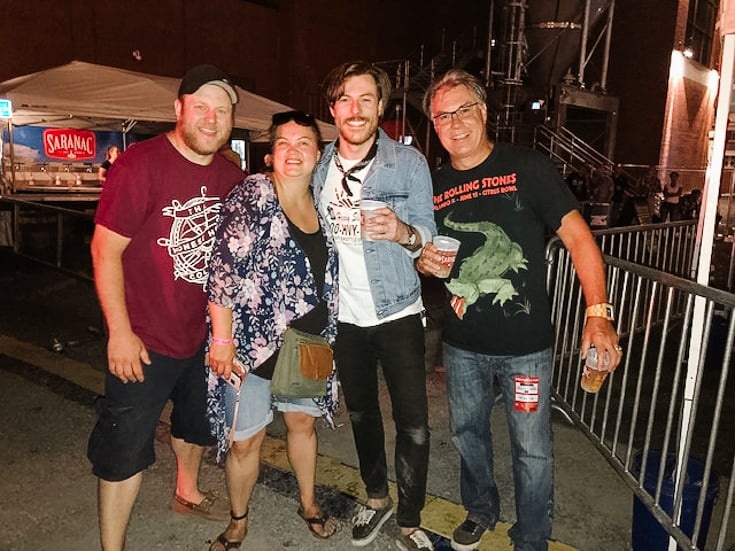 Food Advertisements by
Please note that some of this site’s links are affiliate links, and alabouroflife.com is a participant in the Amazon Services LLC Associates Program, an affiliate advertising program designed to provide a means for us to earn fees by linking to Amazon.com and affiliated sites. At NO ADDITIONAL COST TO YOU, I will earn a small commission, if you purchase them. Please note that these are products I know/use and recommend to my customers. I recommend them as they are good products.
171 shares