Home » Life lived by Me » SeniorAdvice.com Announces Top 20 Cities for LGBTQ-Friendly Retirement in 2019 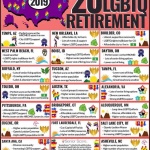 For the 2019 list, SeniorAdvice.com considered multiple factors, percentage of LGBTQ population in the area, available social activities, festivals, weather, LGBTQ Chamber of Commerce presence, presence of gay-friendly senior communities. They also considered quality of healthcare, number of hospitals and pharmacies, local and state legislation protecting the LGBTQ community. Factoring also in to the equation was  cost of living, the city’s score according to the Human Rights Campaign Municipal Equality Index, and the city’s SeniorScore™.

What Makes a Community LGBTQ Friendly

SeniorScore™ is the first comprehensive un-biased scoring system specifically designed to identify and measure the livability for seniors, and was created by SeniorAdvice.com.

The SeniorScore™ ranking is calculated by compiling and factoring over 100 variables, including access to health care and number of senior residents, to help determine how well a specific location accommodates the comfort and needs of senior citizens.

Multiple cities in Florida made the list, including West Palm Beach, for its numerous LGBTQ groups and services, Ft. Lauderdale, mainly for its high senior population, and Tampa, for its affordable living and beautiful beaches.

Arizona and Ohio also had several cities make the list. Tucson has year-round warm weather and many retirement communities. Tempe established protections for LGBTQ individuals from discrimination at home, work and in public spaces in 2014.  Toledo boasts continued efforts to foster and embrace diversity and has low housing prices. Dayton has a number of community programs and services in the city specifically benefiting its LGBTQ citizens.  all in all, factors greatly influencing the attractiveness of these communities.

Previously, the list of top cities for LGBTQ seniors predominately focused on larger U.S. cities. However, this year there was no limit on the size range of cities included.

If you would like to discover more or want to view details regarding the top gay-friendly cities in America for seniors in 2019, visit https://www.senioradvice.com/articles/top-20-cities-lgbtq-retirement-2019.

For more information on SeniorScore™, one of the factors used in determining the ranking, visit http://www.senioradvice.com/seniorscore.