Home » Cats » When Your Cat Misbehaves 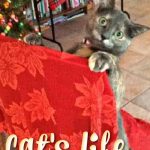 Time to focus on Lou and her friends a little bit. It has been a hot minute since she has been featured. Golly last time I talked Cats was when I talked about Sebastian getting Piper. Today seemed a good day to talk about the off side of feline friends. or when they do not cooperate fully.

Cats often keep themselves to themselves, meandering around our homes like they own the place. But sometimes, they can misbehave. And that can leave you pulling your hair out. You can’t discipline them like dogs. They’re entirely different creatures.

Cat’s misbehaviour comes from a different place from dogs. When a dog acts out, it is usually because there is something wrong in their environment. For instance, you’re not taking them for enough walks or you’re shouting at them all the time.

But with cats, bad behaviour usually just comes from their instincts. Their environment doesn’t have the same level of influence. Examples of bad behaviour include things like scratching household objects, chewing wires, biting people and pooping outside of their litter tray.

When Your Cat Misbehaves

So, knowing this, how can you discipline your cat to become a better feline?

Where possible, we want to avoid directly punishing animals. Most of the time, they’re just going about their lives, just being themselves. And they don’t understand the concept of punishment because they don’t know that they are doing anything “wrong.” Such ideas are utterly alien to them. When your cat misbehaves it is not a deliberate act.

When you see your cat doing something you don’t want them to do, then you might want to try clapping your hands.

Clapping is a great deterrent and an excellent way to associate unwanted behaviours with unpleasant sounds. Cats will soon notice that you don’t clap when they’re doing the right thing, but that you do when they’re misbehaving. Clapping works more effectively than yelling trust me.

Play With Your Cat

If your cat becomes bored, it’ll soon start making mischief. When your cat misbehaves that’s when disaster can strike. There’s nothing worse than a cat with nothing to do. Similar to a toddler, you just never know what can happen.

Cats don’t play in the same way as dogs. But they will still play if you give them something interesting to pursue. For example, you can get your cat to run around the house with you, play with string, or even with toys, like fake mice. We have a feather hanging on a string and she loves it. A laser pointer is another awesome distraction.

Training a cat isn’t like training a dog. They aren’t as versatile in that sense. But making sure your cat is litter trained can help enormously when it comes to keeping their living spaces neat and tidy. After all, you don’t want your cat going to the washroom whenever or wherever they like!

Lou took really well to a change in her litter environment but not all cats do. Take your time and make sure they are perfectly comfortable.

If your cat does something you don’t like, just pick it up and take it to a confined space in your home. Most owners use a cage with a water bowl in the corner.  Lou hates being away from us, so normally closing the door for just a few minutes works wonders.

The idea here isn’t to punish the cat, just remind it that if it engages in certain behaviours, it’ll temporarily lose its freedom. Most cats get the message if you confine them for twenty to forty minutes. There’s no need to string it out any longer than that.

Food Advertisements by
Please note that some of this site’s links are affiliate links, and alabouroflife.com is a participant in the Amazon Services LLC Associates Program, an affiliate advertising program designed to provide a means for us to earn fees by linking to Amazon.com and affiliated sites. At NO ADDITIONAL COST TO YOU, I will earn a small commission, if you purchase them. Please note that these are products I know/use and recommend to my customers. I recommend them as they are good products.
817 shares